Fall is in the air, which--as my mother taught me--means it's sweater weather. Last week, President Lee Myung-bak of South Korea recommended wearing thermal underwear as an energy conservation measure in his country. Hearkens back to one of my earliest presidential memories--Jimmy Carter advocating energy conservation by putting on a sweater and turning down the thermostat.

Will Lee's long johns be a laughingstock in his country, just as Carter's sweater remains an object of ridicule for many people here? Only time can tell. Yet I remain baffled by the fact that most conservative politicians are not more 'conservative' when it comes to energy consumption. I'm disgusted when the likes of Ann Coulter and Rush Limbaugh ridicule energy conservation measures and pump the use of gas-guzzlers.

Sure I understand they are out to 'defend individual liberty' and 'property rights' and to fight 'tree worship', and I know they often speak tongue-in-cheek with lots of irony and satire. But while they may not literally mean everything they say, they certainly don't do enough to promote the enhancement of national security through energy independence. Sure they promote "drill here, drill now," but the most immediate way that American citizens can contribute to national energy independence is reduce! Conserve!

And we can have an immediate impact on our own personal finances and thus the national economy as well. The less money we send overseas for oil (to people who don't like us), the more we have to invest in our economy at home. And whenever we waste energy resources, we are not merely wasting our own pocket money right now: that which we waste we borrow from our children. We are creating an energy deficit for our heirs that is every bit as much of an albatross as the national debt we are hanging around their necks. For while the proven oil reserves keep growing, the actual oil reserves--what God has put in the ground for our collective use here on our planet--keep dwindling. They are finite, and there will come a time when they are truly scarce.

I can think of a couple of reasons Carter was mocked for wearing a sweater: on the one hand, it seemed unpresidential for him to stoop to talking details of sweaters and thermostats. It seems a bit like the president telling us to eat oatmeal for breakfast. Then too, it's just not concrete and easy to pin down just how much of a difference a little thermostat change really makes. In any event, Carter didn't adequately connect the dots between national security or other national interests and such small details as a change in thermostat setting. Yes we were going through hard economic times, but thermostat settings seem personal, like none-of-big-government's-business. It never became a patriotic cause--like victory gardens in WW2.

And maybe there's another reason--perhaps he asked too much 'sacrifice'--along with too small a justification. He called for setting daytime temps at 65° with a setback to 55° at night. Most people have a hard time with that, even with a boat load of sweaters and long johns. More recent suggestions have been along the lines of 68° for daytime (DOE) or 70° (EnergyStar). Last year, I was bent on setting our house thermostat at 68° (and I thought that was high) and my family wanted it at 72° (or above). Eventually we negotiated 69° as a compromise. And I agreed to let the kids use space heaters in their rooms. I tell my kids (with a wink) that God gave us sweaters for a purpose and they are learning to dress appropriately for the season.

I was proud of them at that point. Progress is a matter of degrees! It was something they grew into. Our bodies adjust, and often it's a matter of comparison. I've seen night guards in Nairobi shivering in 55° air wrapped in several layers of coats, while I was reveling in the beauty of a July night that was below 80°! They shiver because it's one of the coldest temperatures they ever have to deal with.

So how much difference can a few degrees make? Estimates come in wide ranges because because it depends greatly on the house, the weather, etc. DOE claims a 1° reduction for 8 hours a day can save 1% of heating costs (see their page for further discussion); equivalently, a 1° reduction 24 hours a day might save around 3%, speaking in ballpark terms.

But here's what it did for our house. This is a graph of our home gas usage for the past 7 years: 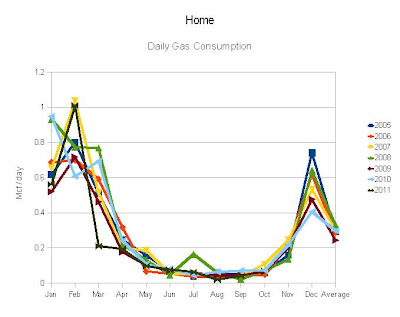 While there's an overall downward trend, it's a bit jumbled to read because of wide fluctuations in weather especially during January and February. Also, 2009 was a better year than 2010, adding to the spaghetti tangle. In all, however, the following table summarizes the gas usage for winter months versus summer months for 2011 versus prior years, with a resulting 20% reduction in heating consumption. However, when adjusted for the added electric consumption of the space heaters, the actual energy reduction was just 10%. Still, that's progress.


Bottom line: claims of 5% to 30% savings on heating costs based on modest thermostat adjustments are definitely within reach, both by turning the thermostat down all day and/or by using a setback at night or when no one's home. Here's a good article on the setback theory and practice, including a 3-year testimonial of a 28% reduction in heating costs, plus references to studies that consistently show significant savings are possible.

What about my office? I share once again a graph of my electric usage over the past 7 years. As can be seen by the dark green line at the bottom, this past January and February I managed to beat or tie both of the prior 2 years, which in turn greatly undercut the previous 4 years. 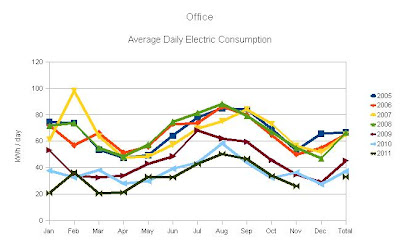 The following table isolates the average daily heating usage for winter months (December through February) by subtracting out the average April bill (minimal heating or cooling use):


Yes, this past winter I managed to cut my heating load by almost 2/3's! And that in spite of a bitter cold spell in February. Of course, I admit my thermostat settings were insanely cold at 50° daytimes and 45° nights. But that was for the overall building (house). Sitting at my desk was made almost-bearable by a little radiant space heater (300W). In reality the temp in my actual office was well north of 50°, maybe close to 60°. And yes, I wear long johns and sweaters both!

So does it matter that someone else has their thermostat cranked up to 80°? That is, does it matter to you and me, to society? In truth it does. Not just in the big picture, long-term impact. But it hits one's neighbors right now. Remember those rolling blackouts here in Texas last February during that bitter cold snap? And everyone's electric cost is impacted sooner or later by the maxing-out of the power grid. I'm sure there were people last February who thought they had a right to a toasty home or office. Maybe they think they've earned the right as an American citizen.

They forget it is supremely a gift from God that they were born in this land of opportunity and can earn a living and provide for their family here. Every blessing from God is given so we in turn can be a blessing to others. Let's see now, am I my brother's keeper? Or let me ask, who is my neighbor?? It is disgusting that some conservatives choose to mock the wise actions of responsible people, and to scoff at voices that advocate reason in the matter of stewarding God's resources.

The LORD mocks those who mock,
but gives grace to the humble. (Proverbs 3.34)