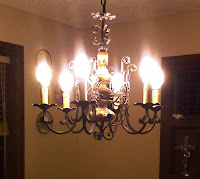 Compact Fluorescent Lights (CFLs) have both friends and foes. I'm a friend, though in the future I see even much promise for LEDs.

This spring I finally replaced the last incandescent in our house. The candelabra-style 40 watt chandelier bulbs were the last to go. It was only when that I found some CFLs that were only slightly bigger (by about 30%) and didn't look totally tacky that I could celebrate discarding the last incandescents. The result is quite passable, though someday LEDs will have enough light output to replace the CFLs. (The highest ouput of any candle-style LED bulb I've seen is only 150 lumens, about equivalent to 15 watt incandescents; they need to triple the output to substitute for 40 watt bulbs.)

In the journey to replace all our incandescents, I've discovered some useful information--and hit a few jogs and bumps in the road as well. So I thought I'd make a checklist of lessons learned.

Now is the time
Go ahead buy a big 12-bulb contractor box--it makes it easy to go through the house and change everything out. They are economical, and you'll keep a good bulb on hand when one burns out. The big boxes also use less total packaging than smaller packages, and the boxes (the ones from home Depot) are 40% recycled and fully recyclable.

And those seemingly-incredible claims on the box stating a savings of $1,104 (for 23 watt CFLs) or $660 (for 14 watt CFLs) are in fact credible. Take the 23 watt bulbs: my rule of thumb says $1/watt saved x 77 watts saved = $77 saved per year x 12 bulbs = $924 total. The manufacturer's math is more detailed and with slightly different assumptions, but my rule of thumb serves to verify their claim--we're in the ballpark together.

So even if your incandescents aren't burned out, you're wasting tons of energy and money by waiting until they burn out to change them. What about those seldom used bulbs--like in the attic? Think of it like this: suppose it has half its life left. It was probably rated to last 1/4 of a year (if burned continuously), so it has 1/8 of a year of burn-time left. If you keep it till it burns out, you will have burned up a total of: 100 watts x $1/watt per year x 1/8 year = $12.50 worth of electricity. So stop the bleeding and replace it with a $2 bulb that will save you money every time you turn it on.

There's another reason to change them all at once: you'll observe a clear, measurable change in your monthly electric usage compared to a year ago. If you change them little by little, the difference will be there, but harder to see.

What to do with displaced incandescents?
Should you give away those half-burned incandescents? Only to your worst enemy. Sad to say, but just throw them away. (If anyone has a better use for them, let us all know.) If they were wasting your money, why waste someone else's? Why waste energy--for the nation? We need to reduce our national footprint for the sake of our national security and our future generations' energy needs.

If you want to give something away, buy two big boxes of CFLs and give one away. Take it to Mission Arlington or your local charity. Or give it to a friend as a not-so-gentle hint. Tell them you're giving them "over $1,000"!


"Let your light shine before men so they may see your good works and give glory to your Father in heaven." -- Jesus (Matthew 5.16)