The #1 Rule of Thumb

The #1 rule of thumb about electric power usage that everyone should know is simply this:


For example, it costs $100 to keep a 100 Watt bulb burning for an entire year. Wow! That's a rule any first grader can grasp. It's precisely true when electricity costs 11.4 cents per kilowatt hour (kWh), and has been a useful rule of thumb over the past decade and at the present here in Texas.


Adjustments for differing rates
So you want to be a little more precise for different electric rates? A quick adjustment will do:


The $77 CFL savings
I used to see $7 CFLs (compact fluorescents) that claimed "this bulb save you $77," and thought I should take that claim "with a grain of salt"--until I applied the above simple rule of thumb. Can one CFL "100 Watt equivalent" bulb really save $77?? Absolutely! Most CFL bulbs are rated to last 10,000 hours, a bit more than 1 year (which is 24 hours x 365 = 8,760 hours). The 100-Watt-equivalent CFL uses only 23 Watts, so it costs $23 of electricity over it's lifetime. Meanwhile, it's replacing 100 Watt bulbs (it would take about 4 replacements during the year) which would have burned up $100 of electricity. So the electricity savings is $77 for one bulb! I'd never have believed it till I did the math myself.


At this rate of electricity savings, how much the bulbs cost is of no consequence--especially since good CFLs can be found for around $1.50--barely more than a single incandescent. (More to come on the best CFLs available.)


So what's all the silliness about Joe Barton defending the energy hog incandescent? The rhetoric about personal freedom is misguided at best, and is largely a defense of pure and simple ignorance. The real freedom that's at stake is the energy independence of our country--which in turn contributes to our national security and ultimate personal freedoms!


So get rid of the incandescents in your home and office and bring in the CFLs immediately. It doesn't make any sense to wait until the incandescents burn out. I know of nothing better to do with them than to throw them away. They're simply burning through money every second they're on.


Changing light bulbs is the main contributor to the 20% reduction in electricity usage at our home over the past year (see the light blue line in the graph below). 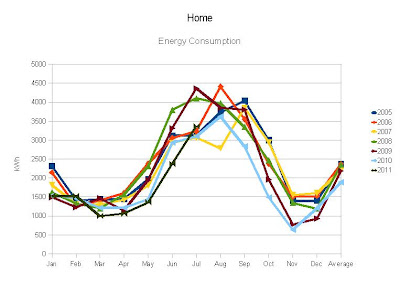 More Examples
Here's a few more observations based on the 1W = $1 rule of thumb:

So this #1 rule of thumb simply puts energy costs in perspective. It makes energy use concrete and measurable. It's much more meaningful to tell the kids to turn the light off not just because "You're wasting energy," but because "That's $23 you left burning there." You can explain it really costs $23 if they leave that CFL on all year long. They get the message. And for the forgetful kid you can throw in a "$1 fine" (or other realistic amount relative to the size of his allowance) for leaving the light in his closet on. It'll bring a smile to his face (sort of) every time you catch him with the light on!


"Make the most of your opportunities because these are evil days." (Ephesians 4.16)

Equip Green - Stewardship for the King

My friends have come to know I'm rather passionate about my energy conservation and other green measures. There's my Prius, of which I can carry on quite a one-sided conversation! There's my solar panels from Solar City, which are a great economic value based on my lease provisions. Or the new LED lights I put in our living room.... And the list goes on.


In truth, my passion is not just about energy. It's about good stewardship. The classic concept that none of this stuff is really mine--it all belongs to the King, and I've just been entrusted with it for a short while. In the Old English sense of the word, I am a keeper of the pigs - a warden of the sty - the sty-ward = steward. OK, so I don't have many pigs to keep, but God has entrusted me with a whole lot of other stuff to keep up with:

God's age-old principle of blessing is simple: he blesses us so that we can in turn bless others. When God called Abraham to follow him,

To put it another way: grace begets gratitude. God gives to us, and logically we return thanks. In fact, in the Greek of the New Testament, the word charis can mean either grace or gratitude - one word encompasses both sides of this reciprocal relationship of giving and gratefully receiving.


So I've always thought the color of a good steward is green. And blue too - because water is such a precious gift for us to make wise use of. But how is this conservation consciousness tied in with the ministry of Equip Disciples with its focus on equipping church leaders in rural parts of Africa and other parts of the globe where theological education is in short supply? The ways are multiple:


And so I've set out to publish Equip Green to convey practical ideas for going green for the King. I will share from my personal journey - both what works and some mis-steps. 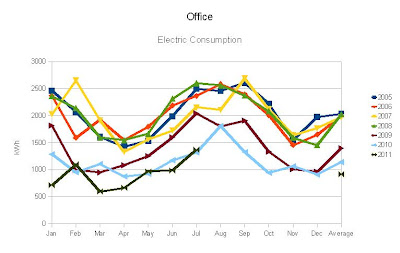 For example, at my office, the last 7 years have exhibited good progress in reducing electricity consumption. Years 2005 through 2008 all averaged about the same usage. Then 2009 fell well below those years, then 2010 (the light blue line) dropped down further, and the incomplete line on the very bottom is 2011. Usage in winter and spring has been cut by more than half, and summer and fall usage is cut by more than a third. And how did I do that? Changing light bulbs and small computer-related appliances, shutting down one computer, changing out the refrigerator, and attention to details. More on each of these points later.


May God bless you so you may bless others!
Posted by Joe Friberg at 12:13 AM No comments: